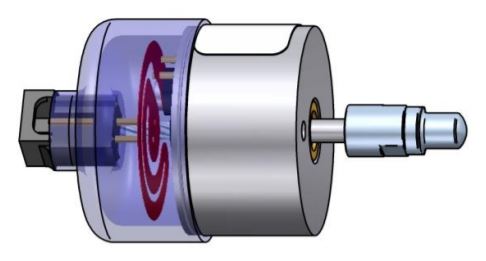 Voice Coil Motors offered by Geeplus are described in terms of the following parameters and conventions:

Force Constant
The force constant for the motor is a factor which multiplied by the excitation, gives the peak force developed (under 100% ED excitation condition).

Velocity Constant
Kv – The velocity constant for the motor is a factor which multiplied by the motor velocity (in metres per second), gives the Back-EMF developed across the motor coil.

R20 – this is the nominal coil resistance of the motor measured at 20⁰C
I100 – this is the excitation current corresponding to 100% ED operation
A-t (Ampere-turns) – the force developed by a given voice coil is proportional to the applied current, however if the winding is changed the force developed for the same applied current will also change. Ampere-turns is the product of the excitation current multiplied by number of turns in the coil, it is useful in making comparisons because it is independent of the coil wire size.

Maximum ‘On’ Time – this is the time taken for the coil temperature to rise from 20⁰C to Tmax when energised under the stated duty condition. It is a simple (and easily measured) way to describe the thermal inertia of the coil assembly. Energising for longer than this under these conditions will lead to overheating, and could lead to failure.

Direction of Operation – force is measured pushing against the end of shaft where this is fitted – in this case the force developed by the coil is pulling it into the magnet assembly, the coil field reinforces the field developed by the magnets and force is stronger in this direction. Where shaft is not fitted, force is measured pushing against the coil former, this is pushing out of the magnet assembly and the field due to coil excitation opposes the field developed by magnets resulting in weaker force. The relationship between force and current will become nonlinear at high excitation levels due to this effect.

Acceleration – where high dynamic performance is required it may be beneficial to use aluminium coil wire to reduce moving mass in the system. It is important to note that while this can have a very beneficial effect in applications with low inertia, in systems where the load is heavy compared to the coil mass, the benefits of reduced mass may be offset by the higher electrical resistivity of aluminium. Geeplus provides a calculation tool ‘Coil Calculator’ which indicates the relative acceleration of a system with different coil materials for the same power input.

Guidance – most voice coil motors offered by Geeplus incorporate a shaft connected to the coil, and bearings for guidance. Unless otherwise stated, bearings are unlubricated polymer bushes without oil or grease lubrication. There are some parts which do not incorporate guidance, and which rely on guidance in the user application to maintain clearance between the coil and magnet assembly.